Ch. Itoba Dr. Science, ECM, whelped 7/27/94 has been an instrumental sire in the success of our breeding program. “Ted” finished from the Bred-by Exhibitor classes, and was shown very sparingly as a special, receiving multiple group placements. Bred to only 10 bitches, he produced 15 champions, several with performance titles. 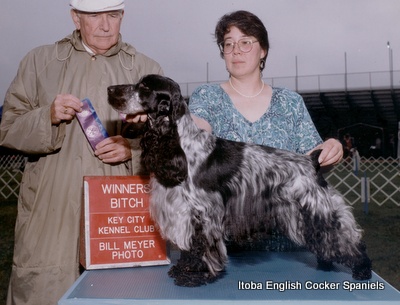 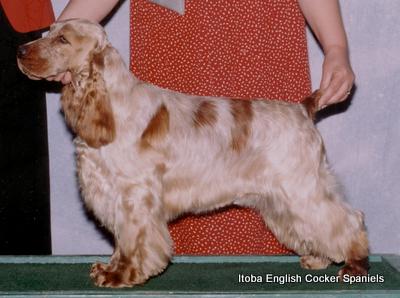 “Crunchy”, nee” Crush”, aka” Cheese Dog” was only bred once, but what an impact this single breeding proved to have.  “Crunchy’s” sole mate was Daisymead’s Heart of Gold, “Dinah”.  From that litter, came Ch. Itoba Heart’s Desire the red bitch and the black dog, Ch. Itoba Just like George. 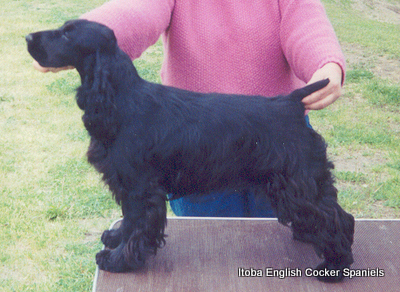 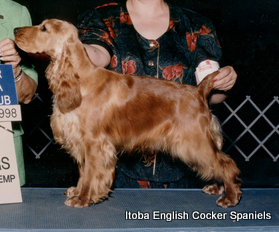 Ch. Itoba Heart’s Desire, whelped 9/13/97, finished quickly, winning her final points handled by my daughter Julia, who was 9 years old at the time.  Shortly afterwards, it was discovered that “Birdie” was in whelp.  This “immaculate conception” was later proved to be sired by Ch. Itoba Special Edition, who had been visiting to obtain his title.  From this litter came Ch. Itoba Heart of the Matter, whelped 12/10/98.  It was from Birdie’s second litter that produced the phenomenal blue bitch, Ch. Itoba Heart of America, ECM.  Her final litter to her grandsire produced the orange dog, Ch. Itoba Stratocaster and the black and tan bitch, Ch. Itoba Ruby Slippers.

Ch. Itoba Dr. Science’s second mate was the black and tan bitch, Ch. Topper’s Makin’ Whoopi.  From this mating came the lovely black and white bitch, Ch. Itoba Daisymead’s True Love.  “LoriAnn” was Best Puppy at the American Spaniel Club in 1998 and completed her title easily from the Puppy and Bred By Exhibitor classes. 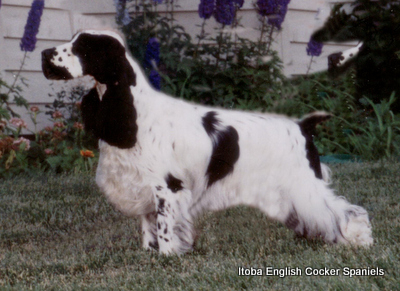