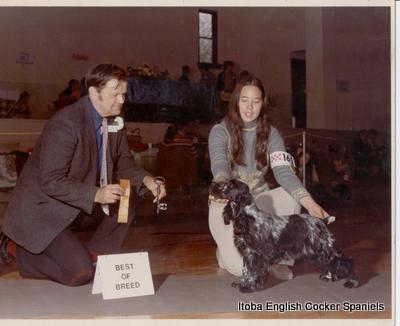 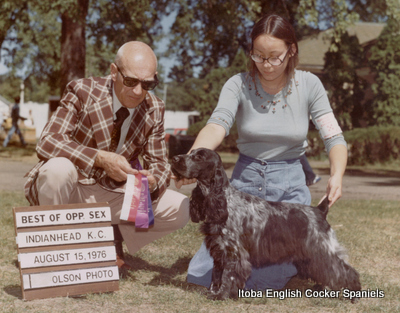 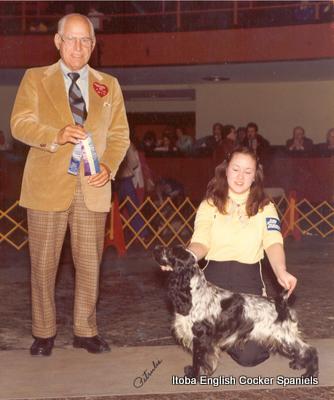 Ch. Itoba Star Burst, (left) whelped November 28th, 1975, was our first homebred champion out of our first litter, and littermate, Ch. Itoba Blue Mischief, CD, (right) our first performance titled dog.  “Star” was handled to all of her wins by my sister Bernice Baker, a young teen at the time.  “Star” was Best of Breed at the Manitoba Cocker Specialty in 1977, under Joe Braddon, of the famous “of Ide” Cockers in England, and went on to win a Sporting Group II.    “Blue”  shown to both his conformation and obedience titles, by my sister Jean Baker Hanle, also while a teenager.  A third littermate, Itoba Dark Meadow, garnered major points before his untimely passing, but it is through him that my current dogs can be traced back to this inaugural litter.  These dogs were sired by Ch. Pride Acre’s Lord Blaze Kieran and out of Kenobo Dancer in the Dark. 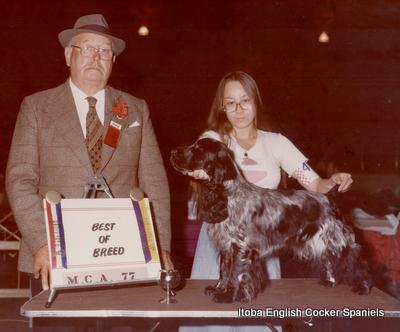 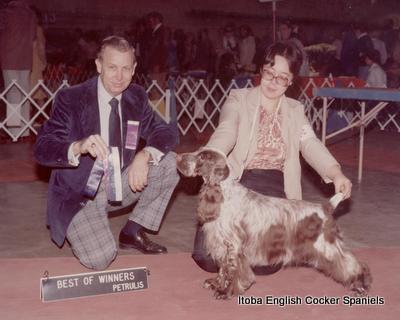 Ch. Itoba Baretta, whelped June 2, 1976, owned and loved by Lynn Amacher-Malm, was from our first hybrid breeding.  “George” distinguished himself early in his career by winning Best in Match at his very first match, under Joyce Dingman.  Shown to his title by Lynn,  “George” was handled during his brief specials career by Mac Hesser and garnered several group placings.  “George” was sired by Ch. Ribbon Raider’s Silver Salute out of Itoba No Jive.  “Hilary” was named with the prefix “Itoba” but was not bred by us. 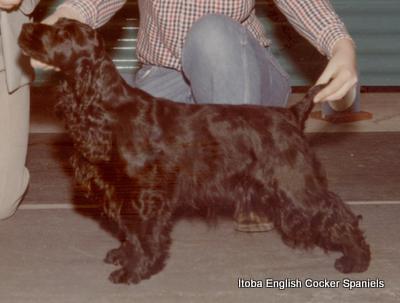